Disarmingly pretty guitar riffs and warm vibes on a cold February night from the New Jersey quintet in a surprisingly short yet satisfying set.

Azniv Korkejian – aka Bedouine – is an accomplished and talented folk singer who played thirty minutes of simple, solo acoustic songs with a bit of a soulful country tinge.  She engaged the crowd repeatedly, even asking for suggestions on what to name a new song she played halfway through her set.  Her life story is one of those that makes me feel boring: born in Syria, she lived in Saudi Arabia before moving to the United States, eventually finding her home in Los Angeles.  As the crowd began to creep ever closer to the stage towards the end of her performance, she jokingly acknowledged the obvious truth that the masses were ready for some Real Estate.

Lead singer/guitarist Martin Courtney and guitar player Julian Lynch look more apt to do your taxes or help your kid with that troublesome calculus homework than rock the house, but I think that is partly by design.  Coming across as unassuming nerds completely belies their rock prowess, albeit on the softer end of the spectrum.  A nearly sold-out crowd at Boise’s greatest live music venue was treated to a set full of warm and pretty guitar riffs that call to mind sunny days on a warm beach.  If you ask me, that is just what this crowd needed in the doldrums of a cold yet snowless February in southern Idaho.

While the set was only about 70 minutes long, it was consistently entertaining, with all of the hits and fan favorites thrown in: “Darling”, the hit single from their latest album In Mind, along with “Talking Backwards” and “Had To Hear” from their breakthrough and best-selling record Atlas (which peaked at #34 on the U.S. charts in 2014).  A few older tracks, “Beach Comber”, “Black Lake”, and “Easy” were included to keep the hardcore fans happy, and we also were treated to two new songs.  Though the names of these songs were not shared, the one I have named “Meet You in the Morning” was a terrific 8-minute affair, complete with a lengthy jam outro. 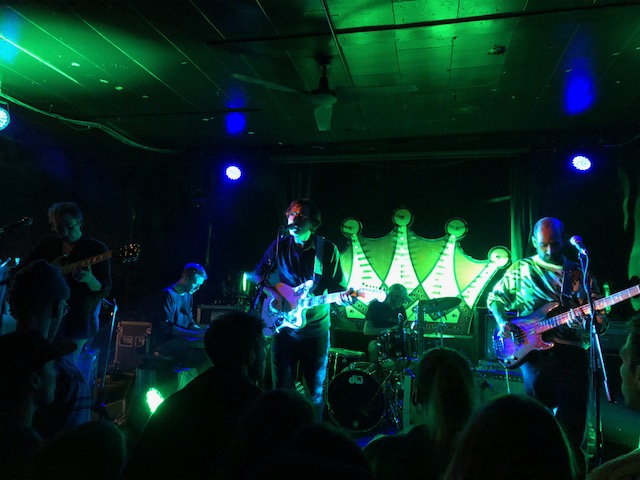 Although they now reside in Brooklyn, these are Jersey boys through and through – in fact, Martin and bassist Alex Bleeker met in grade school, and allegedly bonded over their shared love of Weezer and Built to Spill.  Listening to the music they grew up to write, these influences are pretty clear.  Alex did most of the talking and interacting with the crowd, and topics of conversation included his haircut earlier that day, the correct pronunciation of Boise and their love of the town (seemed sincere, always hard to tell), and jokes about potentially crashing Treefort uninvited.

Martin played both 6 and 12-string guitars throughout the night, and is a force to be reckoned with.  Watching him shred during the few jam-band portions of the show made me realize that if he wanted to, this guy could turn it up to 11 and melt some faces.  For now, this certainly did the trick.