One of Boise’s most anticipated shows of the summer turned out to be quite a night of good music, featuring three acts and lasting nearly four hours.

This guy was a fun opener, and although I was not familiar with him, his music is very accessible and relatable.  He was even better when he appeared onstage to play a couple songs with Shakey later on in the evening.

Jose and his new backing band were the main draw of the evening for me, and didn’t disappoint.  His mastery of acoustic guitar picking was confirmed, it is not the work of studio tricks.  Best of all, his sidekick on guitar was just as good, and the two of them picked and strummed some beautiful and tasty melodies.  We were treated an hour of music, which is about as much time as I have ever seen an opening act get.

They played all of the hits, including their lovely cover of The Knife’s “Heartbeats” as well as two of my favorites: “Stories We Build, Stories We Tell” and “What Will”.  Check out his album Vestiges and Claws or the new EP with the Brite Lites if you aren’t familiar with this songwriter.

I went to this show with one of my favorite humans, and ran into a few others once we got there, which made for great company.  Unbeknownst to me at the time, I was about to get absolutely crushed by a gnarly cold/bubonic plague that I picked up sometime during my Austin trip and the joyous airports and airplanes involved.  As the show went on, I found myself simultaneously having a blast, and starting to feel pretty tired and puny.  So, of course, the show went on for four hours.  Eh, I’m not a complainer; I was with my favorite concert buddy and enjoyed every minute of our time together.

As for the music, Shakey and his band were even better than I expected, and although there was a noticeable lack of female vocals on hits like “Dearly Departed”, it still worked really well.  Not only were Shakey and his band easy on the ears, it was fun to watch him in action, clearly having a good time playing his new music.  Three of my favorite songs from his solid new album Cant Wake Up were represented: “Mansion Door”, “Counting Sheep”, and “Dining Alone”.

Throughout the evening Shakey played electric guitar while his bandmates backed him up; switched to acoustic guitar for some solo time, and then had Rayland come out and sing alongside him.  I actually enjoyed the minimal acoustic portion the most, as it showed just how talented he is.  This guy can entertain a crowd, telling jokes and stories throughout the night.  Many of the stories involved drinking or doing drugs, but were entertaining nonetheless.  Someone in the crowd passed him a mason jar of moonshine and he gleefully accepted the gift, to the crowd’s delight (particularly the people up front who gave it to him).  All in all, a great show, great night, and fantastic time had by all in the sold-out crowd. 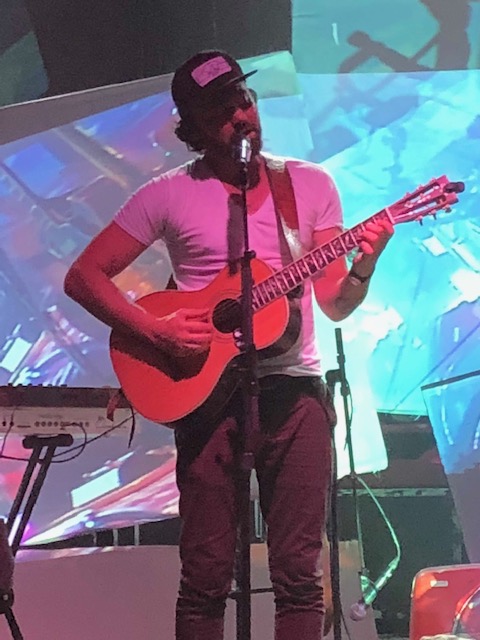