I hadn’t thought of these dudes from Denver in a minute, but when I heard they were headlining the 10 Barrel Pray For Snow kickoff party, it seemed like a good enough excuse to brave the cold for a couple of hours.

When I saw Flobots perform in Boise in 2010 they put on one heck of a show, complete with two competent live rappers backed by guitar, bass, drums, and even a trumpet player.  It was naïve of me to expect to see that level of production on this night, and what we got instead was co-lead vocalists Jonny 5 and Brer Rabbit rapping over live drums from Kenny Ortiz and music piped in to attempt to simulate the full band experience. 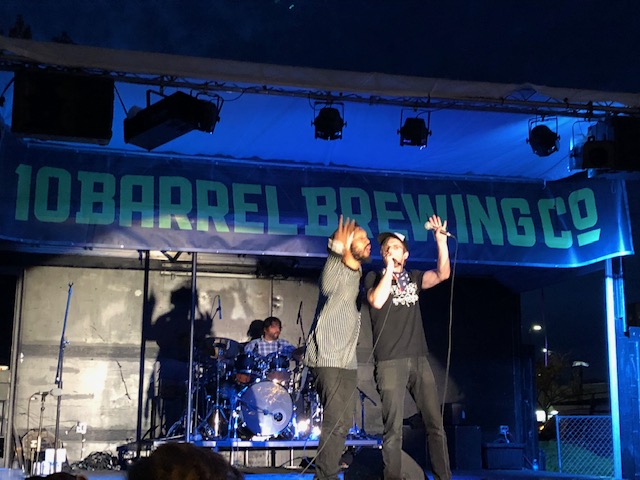 I have to give them credit; while this was clearly a quick money grab, the two MCs did give it a great effort and at times did rock the house.  At other times, it just wasn’t enough and didn’t quite cut it, and that is not just my opinion – I could feel them lose the crowd, win them over, and then lose them again a few times of the course of their two one-hour sets.  We got a handful of songs from their newest album, last year’s No Enemies, but we also got what the people wanted: killer tracks from their debut (and easily their best) album Fight With Tools.

“Stand Up” was one of the first songs they played, and although the guys did crush the song, the violin and trumpet sound effects just can’t compare to a live performance.  “Mayday!!” got the crowd moving, and found both men enjoying the recognition and interaction with the crowd.  After waiting for a little while, we also were treated to solid takes on their biggest hits: “Rise” and “Handlebars”.  All in all this was a fun night, especially considering the free price tag and fun company, but if this band comes to your town, make sure the entire band is playing before you buy that ticket.