The first show of 2019 exceeded my expectations; in short, Todd Mohr is the genuine article, folks.

Opening bands that you are not familiar with are often like that proverbial box of chocolates… amiright?  When I gave this band a cursory ten minute listen on Spotify, I was neither impressed nor horrified.  After hearing a few of their songs it was clear that the band was worthy of the relatively small crowd’s attention, but there was something lacking.  Namely, a vocalist that could carry what is a very solid band musically.  That isn’t to say the vocals were bad, they were merely there and didn’t add much to the equation. 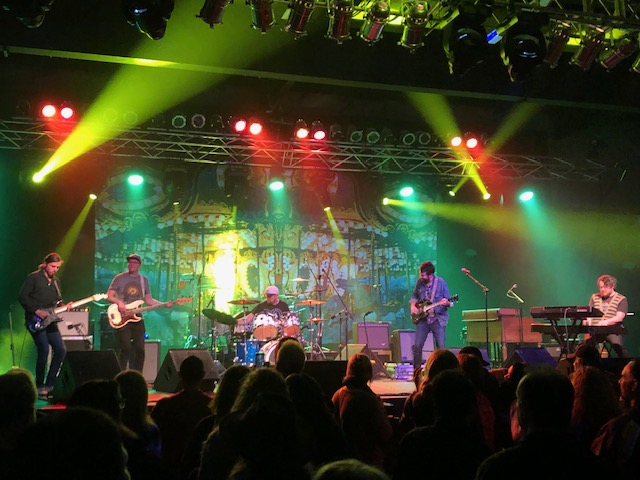 About halfway through the set, my buddy mentioned that many of the guitar solos were being played on the keyboard.  Thankfully, as if they heard us talking about it, they actually started to play their own guitars – to great effect.  This band kicks a lot of ass when they start jamming and soloing, and I would say they should do more of that.  What do I know?  I know they were entertaining, but could use an upgrade on vocals, and that when they were done, we were ready for the main event…

To say I was shocked at the size of the crowd would not be hyperbole: there couldn’t have been more than 400 people at “The Rev” on this night, and I was prepared for a near-sellout. After two hours of awesome, the lack of attendance really seemed like a shame.  These Colorado guys (namely, Todd Mohr on vocals and guitar and his three bandmates) have been at it for over 30 years, and when Todd told us as they took the stage “we’re gonna play lots of music for ya, cuz we’ve been at this awhile”, he wasn’t joking.  Fun fact: the bass player, Rob Squires, uses a 5-string instrument.

Todd (a Columbine High School alumnus) is a masterful guitar player, and a real joy to watch.  He is one of those guys that plays as though the guitar was an extension of his body and not some foreign metal object.

He has a real knack for bluesy, driving riffs and killer solos, and is quick on his feet as well.  During their second song (“Crazy Mary” – no, not the Pearl jam song) he broke a string, finished his mid-boggling solo, and then deftly swapped guitars with his roadie without missing more than maybe two strums.  Smoothest guitar tech instrument swap I had ever witnessed, hands down.

This entire evening was a blast, with only a small lull that lacked solid energy.  The first half was largely newer or more obscure selections, but the crowd was kept engaged.  The second half of the set was dedicated to the fan favorites, and the hits, any of which folks had been yelling out throughout the night.  For example, the run of “Damaged One” (my favorite from their newest album), “Beautiful World” (the under-rated title track from their second-best selling record), and “Kissin’ My Love” (their newest single) was terrific but made it clear that they were saving the good stuff for last.

The most memorable part of the pre-encore show was this four-song stretch: “Rocksteady” (so, so good), “Boom Boom” (the John Lee Hooker cover and their most famous song), “Bittersweet”, and “Broke Hearted Savior”.  That twenty minutes is really BHT&M in a nutshell and brought the crowd to a frenzy.  When they left the stage, we all sort of wondered if they would come back; and if they did, what they would play.  I mean, they just gave us all they got, right?

The encore was a thing of beauty: “Circle” (from their epic Sister Sweetly LP, featuring keyboardist Jeremy Lawton playing keys and guitar), a cover of The Beatles “I Want You (She’s So Heavy)”, and a raucous rendition of Motorhead’s “Ace of Spades” – after which, they took a bow and walked out heroically.  This was quite a show, and the next time they come to town, all of you squares best be there.

Turn the Light Out

For All Time (New, unreleased song)

I Want You (She’s So Heavy) – Beatles cover