The night when Neil (and Willie’s kid) healed me with sweet jams.

The last couple of months have been a real mixed bag for the kid.  There has been a home purchase and training for a new position at work, both things that I am truly thankful for.  I think this is where the social media folks would say #blessed, or something like that.  There has also been heartbreak and what seems like an endless run of various illnesses, allergies, and generally feeling like shit.

On the evening of this concert, I had a fever (I don’t pack a thermometer with me, let’s just estimate it at about 400 degrees) and about as much energy as a molasses-soaked sloth in January.  The responsible thing would definitely have been to stay in bed until my flight home the following morning, and for literally anything else I would have skipped out – but this was my man Neil, so you bet your sweet ass I was there (with Mom, who was concerned for my well-being but doing her very best “this is fine” impression).  By the end of the show, my fever had broke.  Coincidence?  Sure- or maybe, just maybe, the combination of Neil’s jams and Mom’s love healed a wretch like me.

Before my review of the show, just a quick aside: the Paramount is a gorgeous venue,  as you can see here… 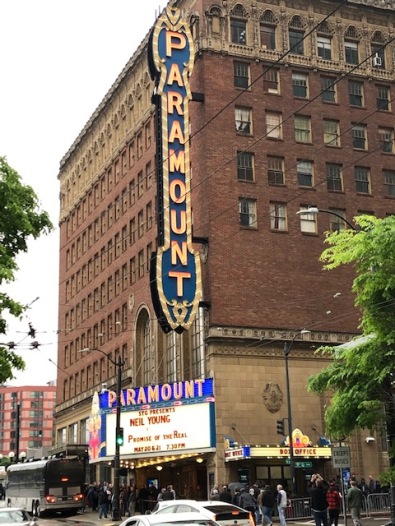 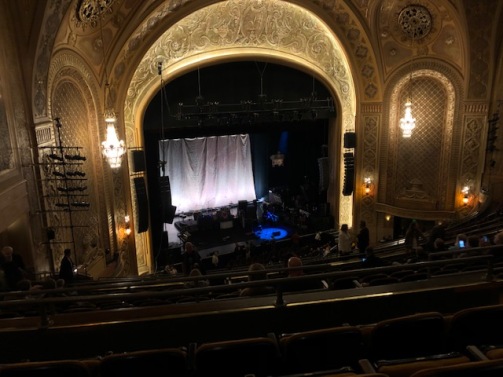 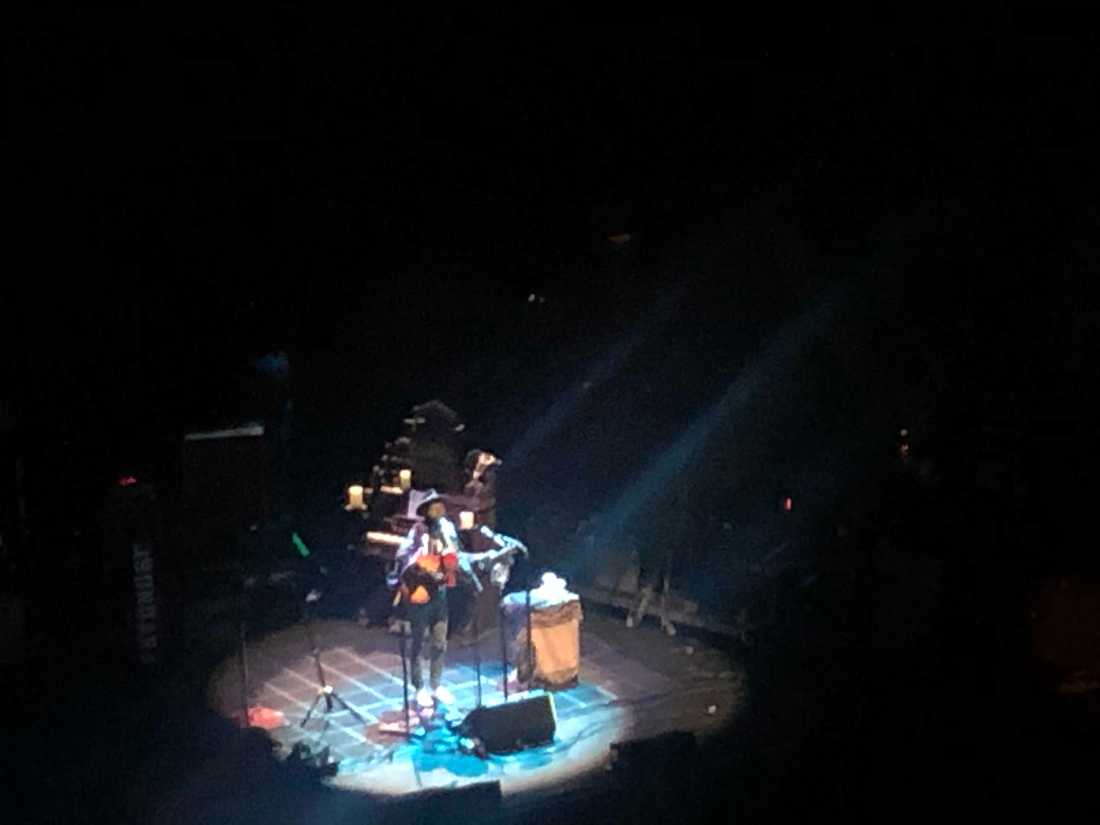 We didn’t know who the opener was until we arrived, and when I saw the name, I had nothing.  Turns out, Mr. Ondara is a lovely singer and songwriter and die-hard Dylan fan (he covered “Just Like a Woman” during his set).  The following week, I heard him on the Broken Record podcast and he told parts of his life story: born and raised in Africa, he came here for college and to try to make it as a musician.  Being a big Dylan fan, he chose University of Minnesota, and moved here in the dead of winter.  He faced some culture shock (the most obvious being the weather) but his hard work and talent won the day and now he is getting a lot of attention (and an opening slot for Neil Young, people).

Headliner: Neil Young (with & without Promise of the Real) 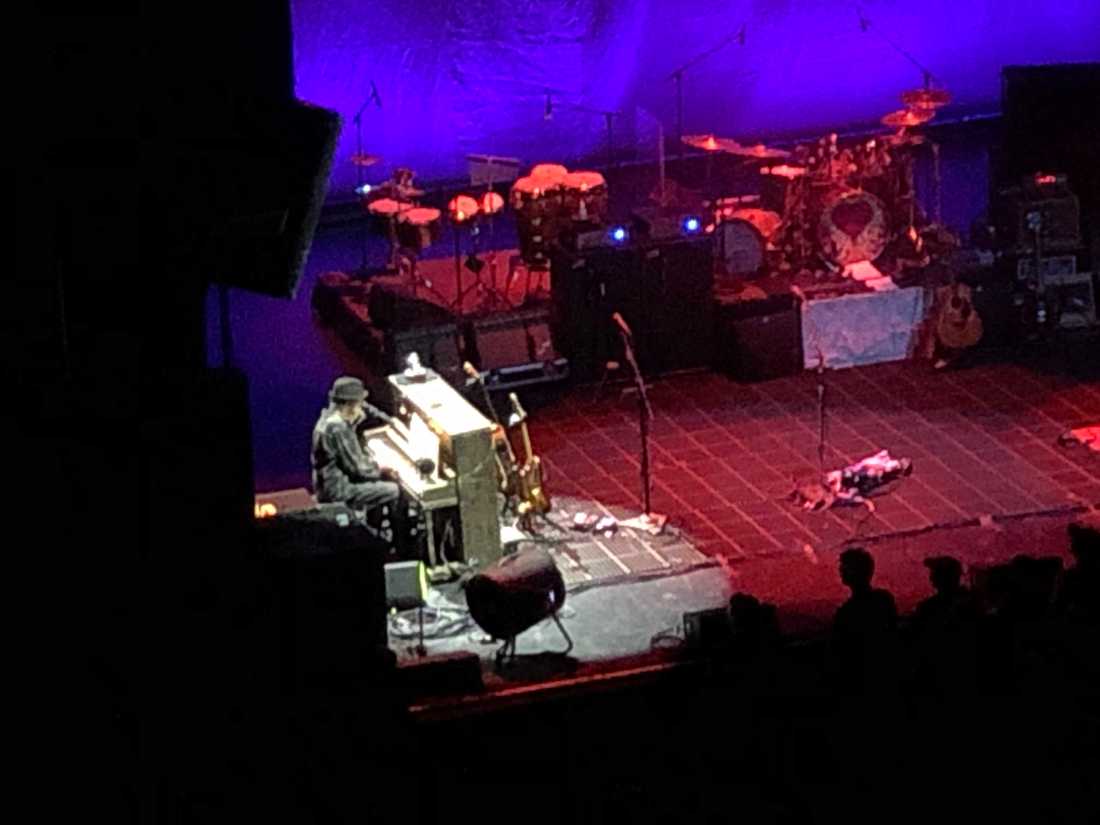 When Neil emerged in his flannel long-sleeve and trademark cowboy hat/fedora hybrid, the crowd erupted with applause.  That is a lot for a man well into his 70s to live up to, but he sure did.  Alone for the first five songs, he began on the piano with “After the Goldrush”, the first of several socially-conscious songs from decades back that still feel mighty relevant.  After commenting on his love for his crew and people that help make the show go on, next up was another piano number and the first of four new tunes he would debut throughout the evening, “Green Is Blue”.  As he walked over to the stand where his acoustic guitar was waiting, he took a moment to drink some water, and then mentioned in his deadpan sarcasm “the acoustic part of the show is brought to you by our sponsor: water”. 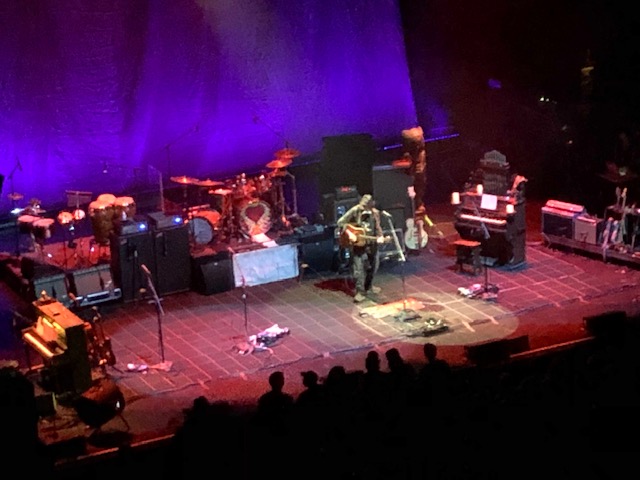 Acoustic guitar (with glorious harmonica) performances of classics “Heart of Gold” and “Comes a Time” were followed by a stirring pump organ gem, “Mother Earth (Natural Anthem)”.  Promise of the Real, a solid band in their own right but mostly known for featuring Willie Nelson’s son Lukas on lead vocals and guitar and for being Neil Young’s backing band for most of the last five years, came on and joined Neil for three more mellow tracks: “Human Highway”, “Unknown Legend”, and “From Hank to Hendrix”.  Neil walked over to an electric guitar, and then things got considerably louder.

Performed mere days after the new Alabama anti-abortion legislation was signed, “Alabama” was a terrific choice from his ridiculously deep catalog (oh, and it’s also a badass song).  “Words”, “Winterlong”, and “Walk On” (the latter from his under-rated On the Beach record) followed.  Then, the moment the hardcores had been waiting for happened: Neil strapped on Old Black, his legendary 1953 Gibson Les Paul that many of his finest compositions were written on.  Now we’re ready to rock!

Of the last eight songs, three were new tracks that might(?) appear on the forthcoming Neil/Crazy Horse record, but there were also five well-known rockers, three of which logged in at well over ten minutes.  “Powderfinger” is an absolute treasure and personal favorite; written for Lynyrd Skynyrd just before that fateful plane crash, it carries a little extra weight and adds to the Neil/Ronnie Van Zandt “feud”/friendship (look it up, I won’t bore you here).  “Everybody Knows This is Nowhere” hails all the way back to 1969 and his first album with Crazy Horse as his backing band.  “Love and Only Love” is an anti-hate epic from the grunge-before-grunge Ragged Glory.  “Rockin’ In the Free World”, is well, amazing, and a perfect pre-encore choice.

After a few minutes, Neil and the boys came back onstage – once Neil yelled out “It’s too dark to put the keys in my ignition, and the morning sun has yet to climb my hood ornament”, I was in Heaven.  You see, “Roll Another Number” is not only a gloriously upbeat and fun song about rolling a joint for the road, it’s one of my favorite songs from my favorite artist of all time.  Show closer “Rainbow of Colors” is another new song and has me very excited for that record later this summer.  By the time it was over, I didn’t feel like I might die from the Bubonic, and my ears were joyously ringing.  What a show!  What a band!  What a night!

Neil & Promise of the Real

From Hank to Hendrix

She Showed Me Love*

Right By Her Side*

Everybody Knows This Is Nowhere

Love and Only Love

Rockin’ In the Free World

Spotify setlist playlist link (does not include the four new/unreleased songs): https://open.spotify.com/user/1217400912/playlist/5breqLnJogO4I2mrWm7gxN?si=V1PSr6_lRIWFh8aZI6EFjw