And now for a slightly belated stroll down memory lane… The sound of decades past.

I wouldn’t discover this album until four years after its release, which is a damned shame considering it is now one of my “desert island” selections.  I can’t fairly explain how much I love this record, from Taylor Kirk’s first moan of “Demon Host” with its ultra-moody vibes and other-worldly songwriting to the last echoes of “No Bold Villain”, the beautiful and subtle total evisceration of a “soulless” foe.

That first song features many gems, including this one: “Here is the church, here is the steeple, open the doors, there are the people with all their little hearts at ease, for another week’s disease”.  The aforementioned album closer lays this verbal assault at an unnamed enemy/ex-lover: “You’re no bold villain, you’re bought and sold; to have a soulmate, you need a soul”.

One of my absolute favorite songs of all time is also found on this record: “Trouble Comes Knocking”, with its ominous and dreary lyrics and music – right up until the last 115 seconds that just might be the most gorgeous and soul-nourishing music these ears have ever encountered.  Yes, this stuff is that good.

Throughout, the mood has a sinister yet almost spaghetti western flavor – just Taylor laying his heart out behind some seriously tasty grooves (see “Lay Down in the Tall Grass” or “Magic Arrow”, which was featured on Breaking Bad, as examples).  Over the last few years, I have recommended this album (and their stellar subsequent work) to many folks and the reviews have been mixed.  Sure, this isn’t for everyone, and I get that.  It just sure as Hell is for me.  Their finest work (so far), this is an absolute classic. 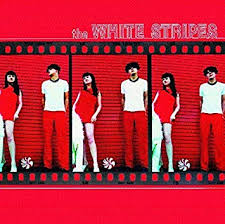 This was one of the best of the rock revival albums of the turn of the century, from the best band of the era.  These two were just kids – look at that album cover!  Jack is at his most minimalist and low key here, and the songs are short, sweet, magical nuggets of energy.  Meg is busy banging the kit like her life depends on it, and there is nary a wasted second on the disc’s 43-minute run time.

Although they wouldn’t really get popular until their breakthrough third effort, this one packs a punch and is worth a listen for anyone who hasn’t heard it yet.  Just be ready to get clubbed to near death, in a good way.  Oh, and there are plenty of bluesy numbers as well: see “Suzy Lee” or the excellent “St. James Infirmary Blues” cover.

Speaking of covers, Jack’s take on Dylan’s “One More Cup of Coffee” is so good (and different) that it stands up next to the original.  “Stop Breaking Down” and “I Fought Piranhas” are also stellar, but if you just want to jump around like a fool for two minutes crank “Astro”, “Cannon”, or “When I Hear My Name”.  Jack has evolved into one of the great songwriters and guitarists of our generation, and surely this is far from his magnum opus, but it does kick a lot of ass and shows the talent and potential inside him.

Everyone knows this record’s back story – recorded for less than a thousand bucks in basically a few hours, it has turned into a punk/grunge classic that has only grown in honor since Kurt’s untimely death five years later.  This is as raw as the band would get, before Albini, Geffen, MTV, and the rest got hold of Mr. Cobain and crew and polished them up a bit.  Don’t get me wrong, Nevermind and In Utero are both amazing albums that rock plenty, but this thing is just a different sound.

Thanks to the legendary MTV Unplugged performance, most casual fans are familiar with “About a Girl”, but there are plenty of other great songs here.  Check out the middle-eastern vibe of “Love Buzz” or the adolescent angst of “School”, or my favorite track here, “Negative Creep”.  If you haven’t heard this one before, and have listened to the hits way too many times, give it a spin.

Anytime I get to write about Neil’s music, I have to make sure to rein myself in a bit.  This classic finds the man at the end of what I consider the greatest ten-year run in music history (yes, I see you Stones and Beatles).  From ’69 to ’79, everything he touched turned to gold, and this collection of softies and rockers is no different.

Recorded mostly live with the legendary Crazy Horse, the first half is a string of mellow and earnest tracks that honor Johnny Rotten (“My My, Hey Hey”), the old ways before white men “settled” America (“Pocahontas”), and, well, love (“Sail Away”).  On the second half, the electric guitars get plugged in and things get cooking.

“Powderfinger” is one of Neil’s finest compositions, and was written to be recorded by Lynyrd Skynyrd (but fate had other ideas), and “Welfare Mothers” is as tremendous as it is politically incorrect.  “Sedan Delivery” finds Neil in his bizarre element and is a favorite of many hardcore fans, and the album closes with the bookend to the leadoff track (“Hey Hey, My My”).

The 80s were not kind to most of the 70s greatest artists, and Neil is no exception (although there are a few overlooked gems between this album and his 1989 comeback Freedom), but this is quite a close to the magical decade.