Warren Haynes is one of the greatest guitar players in the world, bar none, and watching him do his thing for nearly three hours was on another level.

Nikki is one of those musicians who sounds far more compelling and important in person than on record, and her terrific backing band certainly plays a part in that.  Although her retro-country studio recordings are fine, I have never been all that moved by them.  Her 45-minute set left no question as to whether or not she is an artist to know, as she (and the aforementioned group behind her) sounded great and served as a worthy warm-up for The Mule.  A visual highlight for me was my man on pedal steel, in full country/western getup, and Chucks.

Before they played “Come Away Joe”, Nikki explained that the song (about an incredibly sad man) was written for her father Keith.  She used the name Joe to try to hide the origin of the song from him, but in time he figured it out, calling her one night and asking her if the song was about him.  She admitted that it, in fact, is.  They saved the best for last, closing the set with a stellar rendition of the lovely “Jackpot”.

Somehow I had never seen Gov’t Mule, even though I swear they are in Boise on what seems to be an annual basis.  Something always got in the way, but on this go-round I committed early and was looking forward to finally seeing Warren Haynes, one of our finest axe-men, melt some faces off.  I was not disappointed.  He plays with incredible skill but more importantly palpable emotion – the guitar seems to cry and wail in his capable hands.  In fact, I left believing it quite possible that I had just witnessed the very best guitar player on Earth – he is really that good, folks. 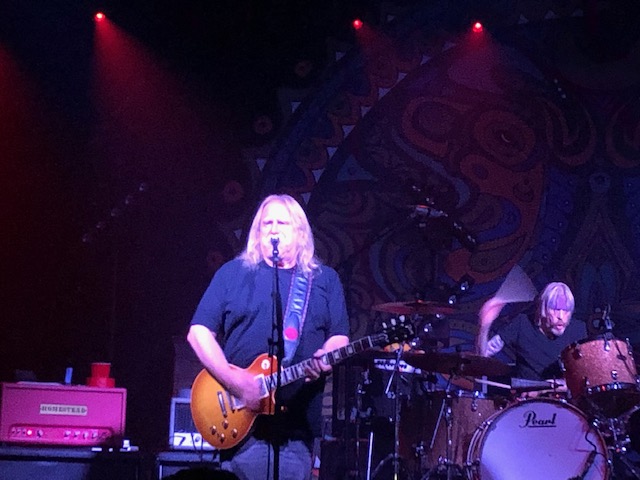 For starters, the man and his band (bass, keys/trumpet, and drums) were consistently entertaining and frequently literally mesmerizing.  They took a brief intermission, but played the longest set I can recall seeing, at just a couple minutes under three hours.  In that span they played 18 songs, including three that I couldn’t place (incomplete setlist alert), and exactly zero of my favorite ten Mule songs.  Even with that fact, I enjoyed the living Hell out of the show – and I am not sure how many bands can pull off playing songs I am not dying to see and still have me as rapt as these guys did.

After Warren left The Allman Brothers in the mid-90s, he founded Gov’t Mule and has been releasing music under that moniker for 25 years now.  Matt Abts, his tremendous, volatile, and energetic drummer, is the only other constant member – and he was a treat to watch.  In fact, Warren and Matt stole the show throughout, which is not to discount the basslines and keys that accompanied nicely.

No question, the star of the show was Warren – particularly his incredible soloing.  When he spent extended moments shredding away (complete with awesome facial expressions) the crowd was enthralled, myself included.  He opened the show by playing some slide 12-string on “Dark Was the Night, Cold Was the Ground”, and went back and forth between 6 and 12 frequently.  The run of “32/20 Blues”, an unknown instrumental jam, and a cover of CCRs “Effigy” with an instrumental rendition of Cash’s “Folsom Prison Blues” thrown in the middle was outstanding and left us wanting more as they took their intermission break.

The second half of the show featured my two favorites of the songs chosen that night, “Endless Parade” and “World Boss”, and even a little trumpet from the otherwise keyboard playing man at stage left.  When the foursome returned after a brief encore break, they brought the guitar player from Nikki’s band for an extended take on a blues song that I couldn’t place but enjoyed mightily.  In terms of pure musicianship, this will go down as one of the best shows I have seen in 2019, and I encourage all guitar lovers to make a plan to see Warren and The Mule when they come to your town next.

Dark Was the Night, Cold Was the Ground

So Weak, So Strong

Child of the Earth