The big man’s influences are everywhere even twenty years later, in large part to this magnum opus. 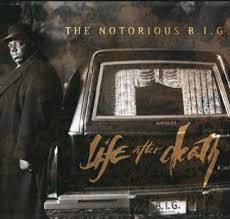 Recorded in 1996 and set to be released on Halloween of that year, this album was pushed back until the following April and Biggie wasn’t alive to see that happen.  Much has been written and spoken about the legend of the man who came up from the streets selling “more powder than Johnson & Johnson” and “going from ashy to classy”, so I won’t belabor it.  This album is an absolute monster, as big as the man himself and as influential to the rap music of the 21st century as anything I’ve heard.

Sadly, much of the subject matter foretells his impending doom (see “Somebody’s Gotta Die” or “What’s Beef?”), glorifying or at least rationalizing the gun violence and retaliatory mood of hip-hop in the 90s.  This record includes quite a group of guest spots, as Jay Z, Lil’ Kim, R Kelly, and Too $hort all make appearances.  Life After Death also brought the beginning of Sean Combs (Puff Daddy, Diddy, P. Diddy, etc) and he has his moments (most notably on “Mo Money Mo Problems”), but the truth is the more Notorious bars on a song, the better it is.

“Hypnotize” is as catchy and recognizable today as it was all those years ago, as is the aforementioned “Mo Money…”.  The cruel irony is that the finest cuts here are those that predict his imminent downfall, like “Niggas Bleed” or “You’re Nobody (Til Somebody Kills You)”.  There is a reason over ten million people listen to his music each moth on Spotify 22 years after his death: his boisterous and braggadocios personality was eclipsed only by his talent.

Worthy Tracks: “Somebody’s Gotta Die”, “Hypnotize”, “Kick in the Door”, “What’s Beef?”, Mo Money Mo Problems”, “Niggas Bleed”, “I Got a Story to Tell”, “Ten Crack Commandments”, “You’re Nobody (Til Somebody Kills You)”

Final Verdict: One of the finest rap albums of the 1990s, or frankly any decade.