A very excited sellout crowd was in the palm of Taylor Meier and crew’s hand, and the band delivered the goods for nearly two hours.

We arrived midway through their set but I enjoyed the few songs we got to see.  They have a traditional southern rock type vibe and most of their songs felt familiar even though I had never heard them before.  We were way in the back, and didn’t feel like worming our way up (hence the distant pictures), but I think there were six of them up there.  Don’t quote me on that.

However, I can confirm there was some terrific steel guitar and plenty of energy, especially when Evan and Taylor from Caamp joined them onstage for a number. 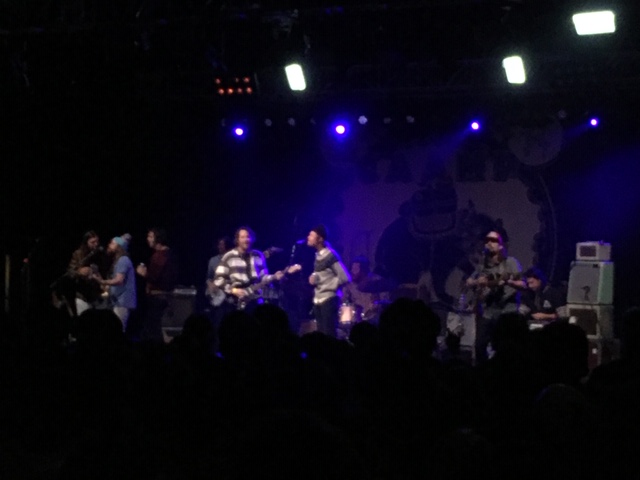 By the time the quartet from Ohio got onstage for their first Boise show, the crowd was tangibly fiending for some good old fashioned down-home folk music.  Sure, it’s a bit lazy, but if you are not familiar with this band, imagine a growlier and less polished Lumineers.  When they started in on “No Sleep”, one of the finest tracks on their newest LP By & By, just about every person in the room lost their shit.  This was one of those rare nights when the band had already won over the crowd even before paying a note.  That can go one of two ways, and I’m happy that on this night the fellas lived up to the hype.

Yes, that is Taylor on guitar and vocals with the killer sweater (although that shit must have been hot because we were absolutely dying of heat by about halfway through).  His voice was as raspy and beautiful in person as it is on the record, which sufficiently answered the “is he trying to sound like Ray LaMontagne or does he actually sound like that” question.  Like so many others, he sings like an (rough around the edges) angel, but when he starts his between song banter, he mumbles so badly we couldn’t hear 90% of what he said.  Hey, at least he was crystal clear during the songs, folks.

Their drummer goes between the kit and a banjo, depending on the song, which made for a nice mix of sounds throughout. Also, Taylor sat behind the kit for a couple of songs towards the end of the show and got along just fine (although, again, how he didn’t sweat literally to death in front of us is a mystery).  These guys are a true band, although Taylor is clearly the leader of the group.

Towards the end of the night, Futurebirds came back on stage (all six of them) and joined Caamp in a lighthearted but fairly solid cover of Neil Young’s “Everybody Knows This is Nowhere”.  Hard to believe that song is 50 years old, but clearly still relevant.  Well done, lads.

Going to the Country

Everybody Knows This Is Nowhere (with Futurebirds) (Neil Young cover)

All the Debts I Owe