In which I thoroughly enjoyed an unusually loud evening at the VAC.

Someone’s mother once told them that if you don’t have anything nice to say about someone, to not say anything at all – I overheard that advice and will heed it here… 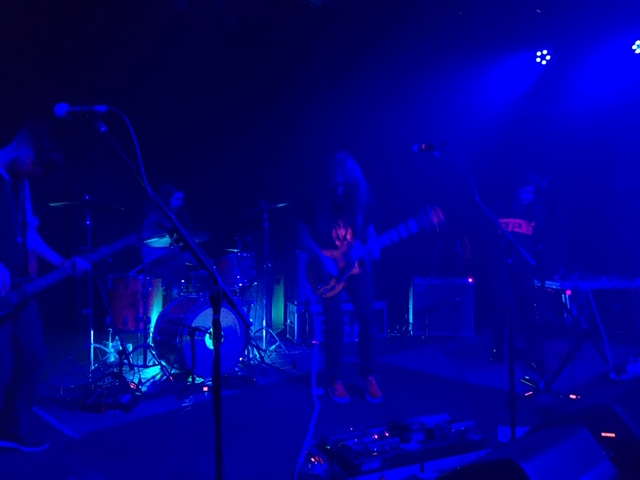 Stephen McBean is a personal favorite of mine, and although the latest album he and his bandmates dropped this year was not their greatest effort, the songs they played from it sounded great on this night (“High Rise”, “Licensed to Drive”, “Future Shade”).  Surrounded by local artwork and a crowd that was at first reluctant to get up from their damn tables, the quintet rocked our socks off for 80 minutes of guitar shredding and tasty keyboards.

This set was considerably different than their headlining Treefort appearance from earlier this year – not only in terms of songs performed, but in general tone.  Part of this was the small venue, which is not as amicable to an extravagant light show, but their vibe was more “just here to rock” than that outdoor show was.  Gone was Rachel Fannan grooving and writhing center stage in a mid-riff exposing shirt (that I won’t soon forget, mind you), and gone were many of their softer songs.  Rather, this was no frills rock and roll, with no banter, and it was all great.

A quick aside: I should have brought my earplugs.  I see a lot of live music, and this was one of the loudest sets in recent memory.  Yes, I was right up front next to the amps, duh.  My ears rang for most of the next day – oops.

“Mothers of the Sun” and “Druganaut” are always crowd pleasers, and their underrated slow-build “Space to Bakersfield” served as a lovely pre-encore selection, as it has all three times I’ve seen them.  When they returned to the stage to a standing ovation from the roughly 150 people watching, I was hopeful they might give us “Modern Music”.  As soon as the opening drums of “Angels” kicked in, I forgot all about that and became completely immersed.

In fact, I was so engrossed for much of the set that my notes were pretty sparse – I am only certain of about 75% of the setlist, forgive me.  I hyped this up to everyone I know and more importantly to myself, and there was no letdown here.

Mothers of the Sun