The incredibly talented singer-songwriter-badass from Australia came to town and held down the Knit all on her own, thank you very much.

Courtney Barnett is a critical darling and has achieved a massive cult following that adores her sharp and witty songwriting as well as her impressive range of musical styles.  I suppose I am a part of that group, since I enjoy her more and more with each release.

After the thoughtful and well-reviewed Sometimes I Sit and Think, Sometimes I Just Sit she teamed up with another smart and gifted guitar player, Kurt Vile, for the wonderful duet album Lotta Sea Lice.  For her second proper solo LP Tell Me How You Really Feel she turned up the volume for songs that had more rock angst and also some of her best songs yet.  Recently she recorded an MTV Unplugged album from her home country and is now embarked on a solo tour which just happened to make a stop in Boise last week.

As has been my luck/excellent timing recently, I showed up right as Hachiku was wrapping up her opening set with a lovely rendition of The Cranberries “Dreams”.  The floor was packed, although the show was not quite sold out, and I worked my way up close to get a good view of the action.   When Courtney walked out to the deliriously excited crowd to a loud ovation and began playing the opening chords of “Avant Gardener”, I was excited to see that she is a lefty.  For some reason, lefty guitar payers make me giddy. 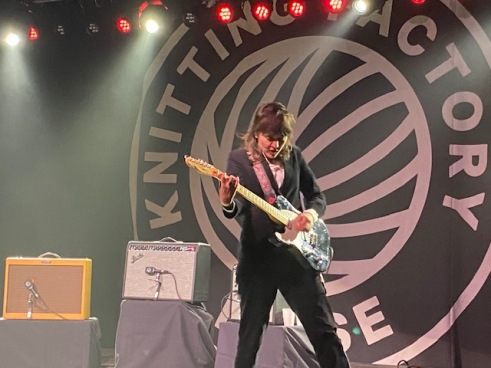 A few songs in, a kid up front managed to get her attention and told her that it was his birthday, to which Courtney led a singalong “Happy Birthday” for him and then played his request: “Elevator Operator”.  What a sweetheart!  She noticed the adoring crowd singing along to nearly every song and commented that “you have a lot of energy for a Tuesday, I like it”.

She covered Hank Williams (“I’m So Lonesome I Could Cry”), Lemonheads (“Being Around”, which she described as her favorite love song), and Gillian Welch (“Everything is Free”), and although she got the verses mixed up on the former, nobody cared because it was so damned beautiful.

Courtney is the real deal and more than held her own on this solo venture – she is truly a captivating artist and my only complaint would be omissions of music I would like to have heard (“Outta the Woodwork”, “Charity”, and “So Long, Marianne”, which she covered on the unplugged record), which is a damn good sign.

I’m So Lonesome I Could Cry (Hank Williams cover)

Everybody Here Hates You

Being Around (Lemonheads cover)

Untitled (Play It On Repeat)

Everything is Free (Gillian Welch cover)