Incoming: new music!  Better yet, new music that is worth your time. 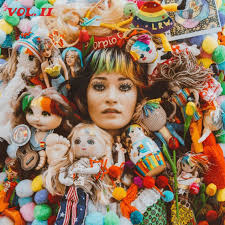 Hard to decide what is stronger on this excellent LP- Lauren’s in your face songwriting or that powerfully seductive voice.

Lauren established herself as a smart and talented songwriter with a mighty voice when her first album Well, Hell was released two years ago.  On the aptly titled Vol. II she takes it to another level.  The self-described blue collar sex kitten brings the smarts and the sass on opening track “Valhalla” with a chorus that rocks and some killer commentary on the search for stardom: “I ate shit on the walk of fame, I tripped looking for my name”.

The short and sweet “Hungry Barber” is stellar, and “We Are Grown Ups” is a delightfully flippant take on relationships in the social media/internet era: “you’re lucky I don’t put your shit on blast, lucky I have so much fucking class… paranoia lives in my inbox”.  Many of these songs are written from a perspective of contempt or bitterness about relationships or society at large, but her presentation is slyly witty and disarming, which makes the commentary even more biting- see “Must Be Nice” as an example.

None of these songs is the greatest thing I’ve heard in 2020, but the consistently solid track list here makes Vol. II one of the best albums this year so far.  Good news to all you Boise friends- she has confirmed an appearance at the postponed September version of Treefort 2020- be there.

The fourth time’s a charm for these indie-rockers who were originally scheduled for a Treefort appearance but are no longer (bummer).

Each of The Districts’ first three albums had something to like, but on You Know I’m Not Going Anywhere the band brings it all together for something bigger and better than they’ve done before.  The album title, and much of the subject matter, ponders the impossibility of “forever”, and boy howdy is the band versatile on this LP.  Opener “My Only Ghost” is an understated, atmospheric haunt that (like most of the record) shows off their softer side.  Rob Grote’s vocals on “Changing” steal the show over lovely acoustic guitar strums on the verses and a gorgeous wall of sound on the chorus.

“Descend is truly beautiful and features this gem: “What good can heaven be, if you’re not there with me; oh well, suit yourself baby”.  The song devolves into a mesmerizing deconstruction over the last minute or so, providing a perfect segue into “The Clouds”.  That song doesn’t quite feel like it knows what it wants to be, but having said that, I absolutely love it, probably because it musically recalls the great Grizzly Bear (at least for this listener).

The whistling, fingerpicked guitar, and sleigh bells on “4th of July” is just plain ol’ pretty, I don’t care who you are.  Good stuff, fellas- too bad you aren’t coming to play it for us Boiseans in September.

Dude has a signature sound, and he continues to work it doggedly.  “You?” and the title track are both solid and provide a 101 course on what Two Feet records sound like.

Electronic-laden noise rock from an interesting collaboration.  Their funky take on “The Pusher” is my highlight on an otherwise mostly forgettable record.